Affirmations are a powerful yet simple tool that can be used anywhere, anytime to help you focus your thoughts and intentions to the optimal vibrations to help create your Legendary Life. Following is content that we developed specific to our Legendary Affirmation Cards. However, you don’t need our cards to take advantage of the power of affirmations. You can also use the information we are providing here for free as a guide to create and utilize your own, custom affirmations. Consider starting your new affirmation practice today after studying this guide.

A consistent affirmation practice of even a minute or two per day can make you feel stronger, more confident, happier, better balanced, healthier, and more productive. All while reducing anxiety and fearfulness.

How do affirmations work? It’s based on the fact that we live in a participatory universe. We take part in building our worlds every day using “only” the incredible power of our thoughts. Our thoughts, beliefs and intentions can and do impact every aspect of our reality. The key to manifesting the reality we desire is to use our conscious mind to understand, harness and focus our subconscious mind. Otherwise, our reality is dictated largely by a subconscious that has been programmed by past experiences, society and current surroundings to have limiting beliefs. However, once you reset your mind to accept the fact that past experiences and surroundings do not dictate your present and future states then you are on your way to reprogramming your subconscious. The most important element of this reprogramming process is belief. You must believe, truly believe, not only in the potential of your desired state of being but believe in its absolute certainty. Believe that it is already present even. Some of the more cynical readers may be rolling their eyes at this point at what may on the surface read to them like “woo-woo, New Age, mumbo-jumbo.”

Please consider, however, that what we are describing has been communicated in similar forms across all major religious and spiritual philosophies for thousands of years. It is also a foundational teaching of many of the leaders in the fields of self-improvement, motivation, empowerment and human optimization.

For example, read the following words spoken by the Buddha some 2,500 years ago in Nepal:

“What you think, you become. What you feel, you attract. What you imagine, you create.” – Buddha

Around the same time period as the Buddha was speaking about the power of belief the great philosophers were teaching the same lessons to the ancient Greeks thousands of miles away:

“Day by day, what you choose, what you think and what you do is who you become.” – Heraclitus

Hundreds of years later Jesus was preaching the same thing:

“…If anyone says to this mountain, ‘Go, throw yourself into the sea,’ and does not doubt in their heart but believes that what they say will happen, it will be done for them…I tell you, whatever you ask for…believe that you have received it, and it will be yours”. – Jesus (from The Bible – New Testament – Gospel of Mark 11:23-24)

Flash forward two thousand years to 20th century India and the truth about the power of belief hasn’t changed:

“Men often become what they believe themselves to be. If I believe I cannot do something, it makes me incapable of doing it. When I believe I can, I acquire the ability to do it even if I didn’t have it in the beginning.” – Mahatma Gandhi

Finally, review these three quotes by Tony Robbins, the trailblazing, contemporary leader in the areas of self-improvement and empowerment:

“Whatever you hold in your mind on a consistent basis is exactly what you will experience in your life.” – Tony Robbins

The bottom line is that the world’s greatest religious leaders, philosophers, business titans, politicians and thought leaders have been preaching the same exact message about the importance and power of belief in the quality and trajectory of our lives across all cultures, geographies, religions and races throughout all of recorded time.

If you are more comfortable with a science based approach as opposed to a religious, philosophical or spiritual tack then you will be interested to know that there are many experiments in the field of quantum physics that have scientifically documented the ability for subjects to alter reality using only the power of the mind.

Consider this excerpt from a 1998 article in Science Daily describing one such experiment:

“REHOVOT, Israel, February 26, 1998 – One of the most bizarre premises of quantum theory, which has long fascinated philosophers and physicists alike, states that by the very act of watching, the observer affects the observed reality.

…Researchers at the Weizmann Institute of Science have now conducted a highly controlled experiment demonstrating how a beam of electrons is affected by the act of being observed. The experiment revealed that the greater the amount of “watching,” the greater the observer’s influence on what actually takes place.”

Ok, now you understand how focused beliefs can create your desired reality. So how do the Legendary Affirmations help you manifest the reality you want? It’s about identifying and breaking down a seemingly complex desired reality into its basic building blocks and then focusing on those simple statements in a consistent practice. The more we repeat these affirmations to ourselves, the more we believe that they are true. Accordingly, they begin to change the way we think and act and thus help us shape our lives to be the way we want them to be.

A couple other things to note about the Legendary Affirmations. First, you will notice that all the affirmations are written from a positive standpoint. For example, we say, “I act promptly and decisively.” We don’t say, “I am going to improve my indecisiveness”. This is a seemingly small but very important detail. When we affirm negative or undesirable traits, even in the context of wanting to release them, we feed those traits with new energy which empowers them to continue to exist within ourselves. Conversely, by repeating a positive statement you alter thought processes which subsequently empower you to alter your behaviors and the way you approach things. When we affirm from a positive standpoint and state it in the present tense, we energize the desired state and begin the process of manifesting it into being in our lives.

Another note, the Legendary Affirmations are mostly written in the first person, “I am”, “I have”, “I can”. By being constructed as such, they are both personal and also spark a call to take action. As such, the affirmations have a much larger effect on your brain compared to, for example, reading inspirational quotes.

You may also ask, aren’t affirmations just a methodology for you to brainwash yourself? The answer is “Yes, absolutely!” More precisely, they empower you to connect with your true potential and deprogram yourself from the limiting beliefs you’ve already been brainwashed with throughout your entire life.

Ok, let’s talk about how to actually best utilize your Legendary Affirmation Cards. There are several great options. Ideally, you should use them daily as one element in your overall morning routine. This will help you kick start your day with motivation, positivity and focused intention. Refer to the following for some of our recommendations and guidelines on best practices.

In terms of selecting which affirmation to work with on a given day, there are a couple methodologies to choose from that we describe below. Select the one that feels right for you or play around with both.

You will notice that the deck is divided into six categories: 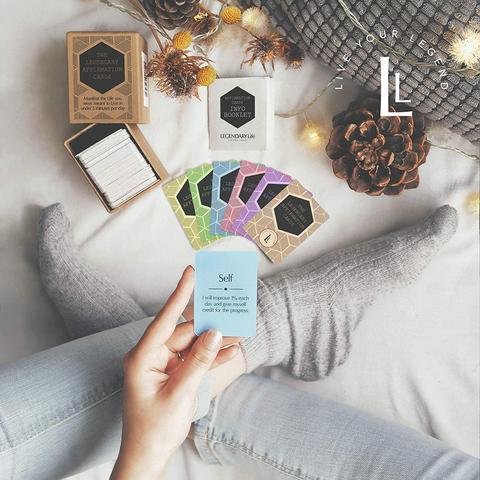 At certain times in your life you may feel like one of these areas may need extra focus. During those periods you may choose to work with only the cards from that particular category. When doing so, first break out all the cards from the category you want to focus on from the master deck. Next, you can either choose a random affirmation in that category to work with or you may review all the affirmations in the category and intentionally choose a specific card to work with that may represent something that you are especially focused on addressing in your life at this time.

First, shuffle and / or cut the master deck of cards as much or little as feels right to you. When you’re ready, pull out a random card. Trust that when you draw your card you will receive the exact affirmation that you need to absorb for that day’s practice. Once you’ve selected your affirmation take a moment and look at it. Really absorb the statement and let it sink in. Next, try to think – why did this one come to me now? In most cases, the answer will be obvious to you and require little thought.

Regardless of which method you used to choose the card, the final step is the same. Own It! Hold your daily card close to your heart and repeat the affirmation out loud for at least one minute. While doing so, align your thinking with its message. Focus on summoning that energy into your life. See it and believe it. Visualize any change in yourself that the affirmation represents as if it’s already present rather than a desired state of being that only exists in some vague future. Imagine the world you’ll experience by making the words on the card your reality. See it down to the smallest details. How do you feel, how do you dress, the sights, the sounds, the smells. Finally, and most importantly, take action if necessary.

Other great ways to use your Legendary Affirmations: 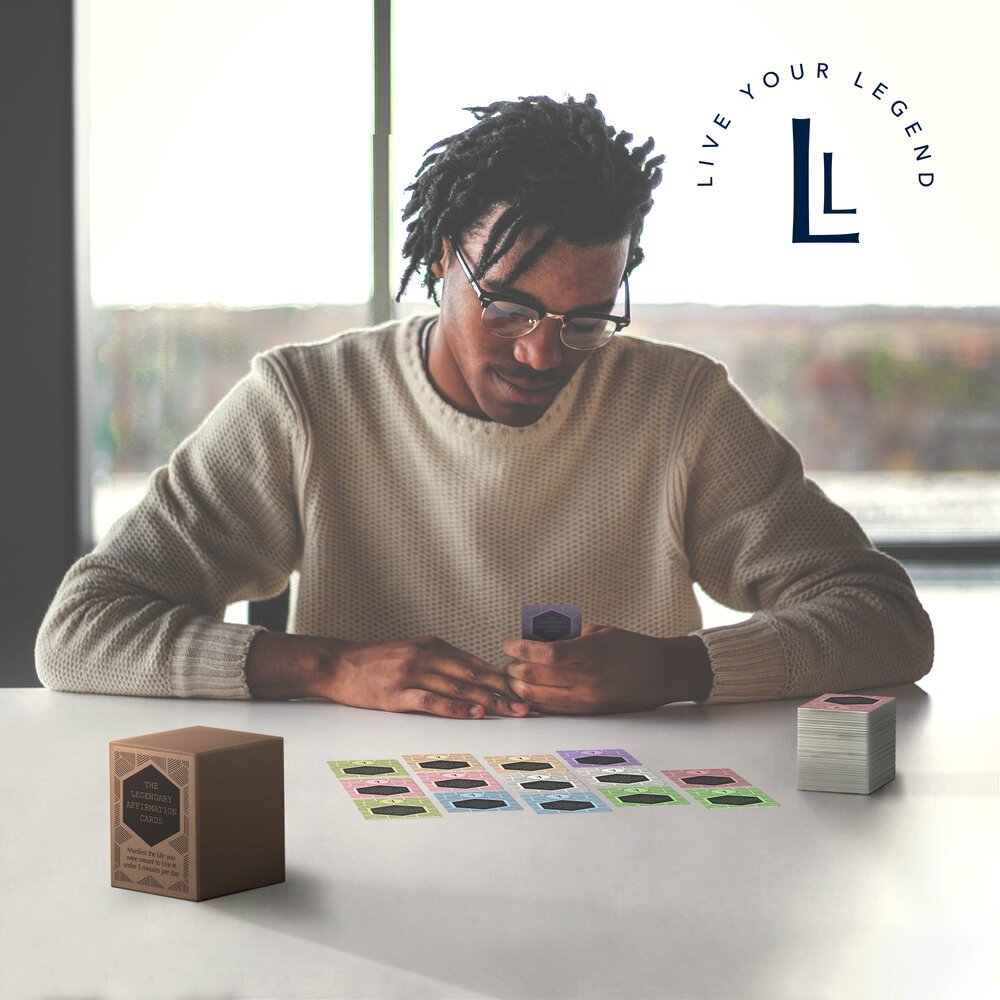 Consistency is Key – You will find it difficult to reach any goals worth achieving by taking inconsistent action. If you wish to run a marathon, you don’t train once a month, right? Well, same goes with creating your Legendary Life. By practicing affirmation daily and forming a habit of it, you are showing the universe and yourself that you are fully committed to succeed.

Affirmations can be a life changing tool, but only if you commit to a regular affirmation practice and only if you believe in the truth and power of the messages on your cards. And as always, remember to Live Your Legend!